In all, 21 members (out of well over 100) attended. Many members who attended previous conferences could not make it. Some members (like Sanjeev) attend only every alternate one due to the costs involved). While not ideal, the conference provided sufficient evidence, if any is needed, of the high quality of individuals who have joined FTI.

Participants who remained at about 5 pm on the second day (Sunday) are depicted in the photo below. 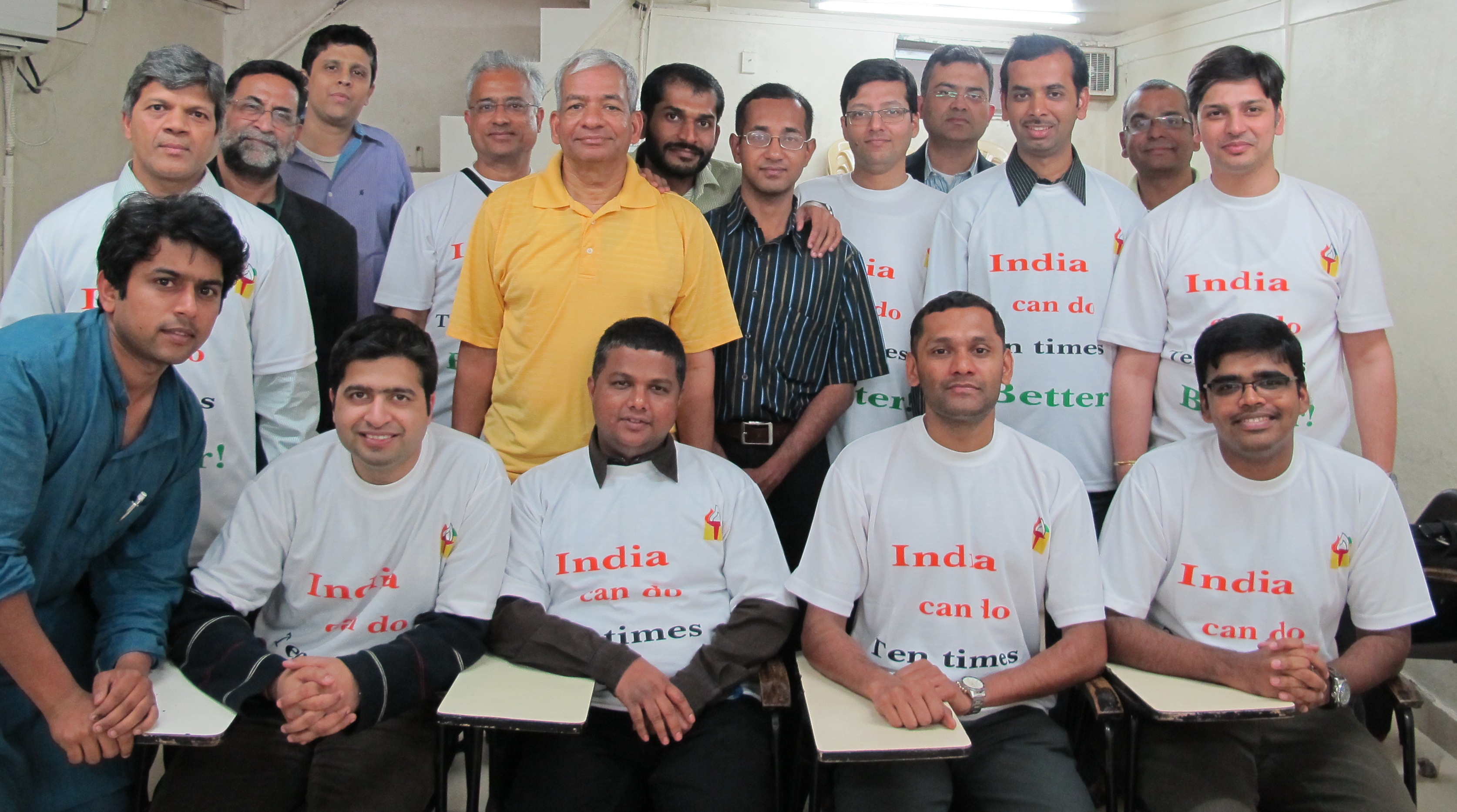 This blog post summarises the discussions and focuses on key agreements:

A concern was raised by that absence of clear roles could be a root cause of a perception among some people that “no action was happening in FTI”. While FTI has some clear (e.g. Secretary, Treasurer, FTI managers group, etc.) there was need to get greater focus.

It was noted that FTI had successfully completed a large number of projects so far. Some of these include, with key project leaders indicated in parentheses:

FTI doesn't have money or command structure to motivate action. It also doesn’t want a command structure. What is needed is a set of well-defined causes/projects that will motivate members and get greater participation.

Decision:
It was decided to streamline FTI’s roles to get results and increase momentum. It was agreed that all causes/ projects should have volunteer coordinator as team leader/coordinator/project manager. Members who volunteered for such roles would then provide their proposals to the FTI Forum, outlining what they will do and the support they need.

Potential roles:
Various roles were identified. Participants also offered to undertake specific roles. The following is an illustrative list. The names allocated against these area have been removed from the published list:

Flexibility on policy
Should FTI seek tight coherence on policy positions or whether we members should be allowed some latitude on policies?

It was agreed that some flexibility, within a tight boundary of liberty, was acceptable, along with an opportunity for debate and discussion.

New members should be encouraged to test their understanding. Older members must have some patience with these discussions, and help new members to reach coherence. Policy discussions are the best way for new members to actually learn liberty and capitalism.

However, we are not in the business of changing the mindsets of dedicated socialists or communists – so, our joining conditions would continue to insist on adherence to classical liberalism. Fundamentals/ basics of classical liberalism can not be compromised.

Leadership process
A question was raised about FTI’s leadership process. Why would anyone contribute to FTI’s growth if they did not know whether their work would be recognised when decisions are taken by FTI to nominate people for constituencies. And what would happen, for instance, if 10 FTI members wanted to contest from the Gurgaon constituency, how would this conflict be resolved?

While there is no precise model on FTI for such leadership, it is clearly understood that the team, through its own deliberations, will arrive at processes for such matters at the appropriate time. It is expected that the contributions made by team members would be pivotal in a particular member’s prospects in a particular situation.

It was agreed that FTI must respect the contributions of members of the team and acknowledge these contributions. There must be a culture of giving credit to members who lead (and deliver) various projects. (FTI is working on a document to publish successful projects undertaken by FTI members so far)

It was also agreed that all roles (except those which are legally required, e.g. Secretary and Treasurer) should be called Acting roles. Also, all members should take the role of Acting Coordinators for a particular constituency. Where there are more than one FTI members, these members could work out a process within themselves. Having an acting role implies flexibility. All such roles can be replaced by anyone else through a competitive process (e.g. election).

Information gap
There is activity taking place on the ground (Akalpita/ AR Patil) about which most team members are not aware. A coordination mechanism was proposed to ensure that such activities are widely known within FTI.

Experience of Mumbai 227
Akalpita Paranjpe (supported by Arun Shankar) explained the process of arriving at a decision to contest MCD elections, the process followed (including how candidates were shortlisted), the results, and the lessons learnt

Key lessons learnt
– The application process for candidates must be simple.
– The entire details of the application process must be stated in advance
– The problem of reserved seats needs considerable thought
– It is very difficult to bring small, new parties together to form a bigger whole (party). It is better to get the same people on a common platform (i.e. coalition)
– Due to logistics issues within cities (traffic, lack of venues, etc.) it is necessary to build an effective conference call system for coordination and communication with all team members.
– The key messages did not percolate through to the voters due to multiple issues

Political positioning
The team first identified a key position in the political space that FTI members should aim to occupy. Examples of existing political spaces include:

The discussion identified the following potential spaces for FTI:
Economic/political

As a result of extensive discussion/ voting, the overarching space was prosperity, supported by limited government, security and justice. 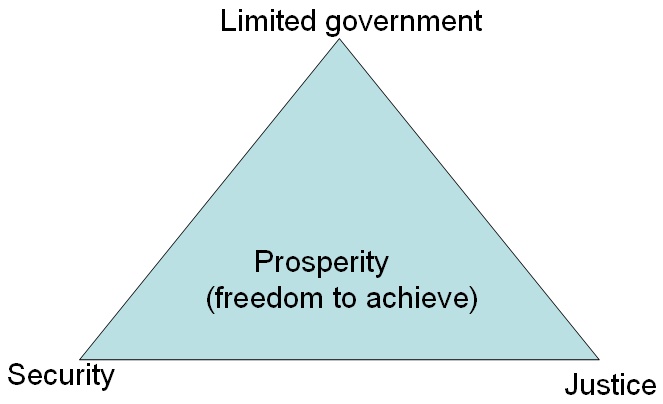 Potential causes/ issues/ protests
The team then discussed potential causes that would help FTI occupy these political positions in the public mind.

Before identifying the specific cause/ issues, the framework for causes/ protests/ issues was identified. It was agreed that no cause that FTI promotes should go outside the following bounds:

a) A cause which FTI leads should unite people from various groups. FTI should also join/ support other like-minded positions

b) A token Gandhian protest is acceptable where FTI believes that a particular law in India is incompatible with the principles outlined in the triangle, above. (This means public opposition to the law and explaining why it is harmful.)

c) The cause/protest should be undertaken within FTI's capacity (resources).

Many ideas were identified but after discussion the following options remained on the table:

Each of the members/s who proposed these causes would propose next steps.

The Delhi FTI chapter experience
Dipinder explained how the Delhi chapter has grown, and outlined the various actions it has undertaken. These include:

Membership process review
FTI agreed to launch a review of the membership process on FTI that would include capturing (and maintaining) phone, location information of all members (old and new), so they could be effectively connected with local chapters.

Summation
Sanjeev summed up the conference and noted that this had been an extremely successful conference. We are going out with renewed confidence and focus. In particular, actions arising from this conference should be implemented and followed up.

He compared the task with that of climbing Mt. Everest. There are three stages to climbing the mountain: drawing board stage, base camp, and then the climb. We are currently at the initial stage and are preparing for the base camp when all resources, plans and actions would be ready. This includes forming a significant understanding of the political marketplace and doing appropriate work to build demand.

Our job is NOT merely to find leaders and do nothing. We are working on many fronts:
– finding the best talent in India (and converting others)
– training them in leadership (including public speaking/ local language communication)
– branding these leaders as HIGH QUALITY
– occupying specific political spaces in the public mind through strategic actions
– designing and testing the messages through intensive interaction with the people of Bharat
– preparing detailed polices so we have policy alignment as a group of leaders
– preparing all logistical (and internal communication) systems
– fund raising
– practice (dry run) of elections and electoral laws
– building a massive support base of leaders in each constituency
etc etc.

Vote of thanks
Participants gave a round of applause to the Mumbai team for organising the wonderful conference.