Vice Admiral (Retd.) V Bharathan (a member of FTI) has recently wrote about his early experience of FTI on  purpleberet.com, an online platform linking the armed forces to the Indian society, communicating the forces’ ethos to civil society at large.

Excerpts from his article: "FTI strikes a chord and tugs at our thoughts. It opens our minds to our true potential and immense possibilities for India. It asks us for no sacrifice but only seeks to spread awareness of what we can and ought to do as ordinary Indians. It is an overarching concept that can evolve into a process of pragmatic, progressive change for the betterment of Akand Bharat across the spectrum of Nation management."

Here is the link to his full article.

FTI conducted an outreach program in Allahabad on 2 September 2009. The outreach was led by Anil Sharma. 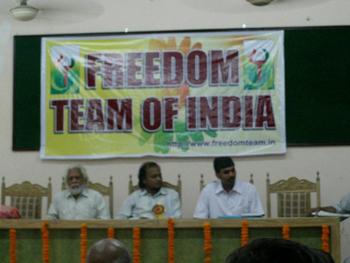 Six pictures from the outreach effort can be downloaded here (1.4MB). A report on the event will be published in the FTI Magazine on 15 September 2009.

For various reasons the attendance at the program was limited, but the message was picked up in the local media. A hesitant but important beginning.

FTI conducted an outreach program in Mirzapur on 30 August, 11am to 4 pm. The outreach was led by Anil Sharma. 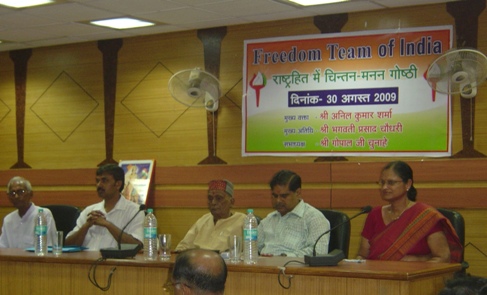 Photographs: Seven photographs from the event are available here (2.6  MB zip file). A report on the event will be published in the FTI Magazine on 15 September 2009.

The meeting was held in Mumbai on 1st August 2009. Awadhesh Singh, Vishal Singh, and Babu Joseph from FTI attended the meeting, along with S.V. Raju the organiser who is also an FTI member. In all, there were about 60-75…

FTI conducted an outreach program in Indore and surrounds from 2 July to 9 July 2009. The program (PDF, 6Kb) was led by Shantanu Bhagwat with active support from L.K. Kandpal and Ajay Anand.

Members of FTI believe that religion is a purely personal matter, not a matter for government policy.
Following are some topics covered in this policy:
1. The significance of religious freedom and tolerance
2. The need to keep the state and religion separate
3. The role of the state in regulating the ‘excesses’ of religion
For more details click here…

On the important occasion of the Republic Day, the Freedom Team of India has released its new website http://fti.sabhlokcity.com and an eight page brochure.