Obviously, one of the greatest enemies of liberty: Rousseau (Plato and Hegel come close, and Marx is merely a lackey of Hegel).
What this interpretation of democracy does is to ENTIRELY DESTROY LIBERTY.
It upturns the very purpose of the state through sleight of hand:

But it is asked how a man can be both free and forced to conform to wills that are not his own. How are the opponents at once free and subject to laws they have not agreed to?
I retort that the question is wrongly put. The citizen gives his consent to all the laws, including those which are passed in spite of his opposition, and even those which punish him when he dares to break any of them. The constant will of all the members of the State is the general will; by virtue of it they are citizens and free.35 When in the popular assembly a law is proposed, what the people is asked is not exactly whether it approves or rejects the proposal, but whether it is in conformity with the general will, which is their will. Each man, in giving his vote, states his opinion on that point; and the general will is found by counting votes. When therefore the opinion that is contrary to my own prevails, this proves neither more nor less than that I was mistaken, and that what I thought to be the general will was not so. If my particular opinion had carried the day I should have achieved the opposite of what was my will; and it is in that case that I should not have been free.
This presupposes, indeed, that all the qualities of the general will still reside in the majority: when they cease to do so, whatever side a man may take, liberty is no longer possible.

This is meaningless drivel. It can be interepreted ANY way one wants. There is NO reference in Rousseau to natural rights, and to the fact that the state is created ONLY for one purpose: to defend our life and liberty.
Arvind Kejriwal's Swaraj comes squarely from this socialist tradition. There is no defence of liberty in his mind. No demand that Gram Sabhas be tightly constrained. Instead, they are to get a free hand. 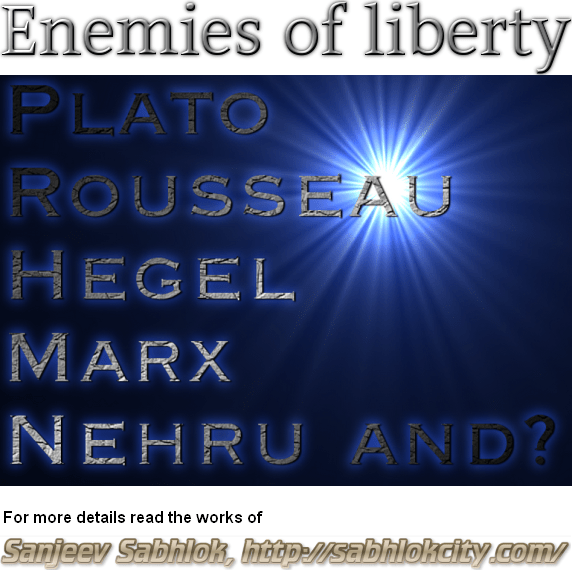