He consciously exploited the esteem in which Mahatma Gandhi is held in India to raise his own image in the public mind.

Behind the stage during his fast, he put up a MASSIVE photo of Gandhi.

I objected sternly to this (in an old blog post).

For Anna is not a Gandhian by any stretch of imagination, and has no idea why Gandhi did what he did. He uses fasting, for instance, as a tool of blackmail, not a last resort tool of self-purification, when persuasion entirely fails.

And he has no compunction in using violence to enforce his will.

Gandhi would have strongly objected to his photo being used by Anna Hazare. 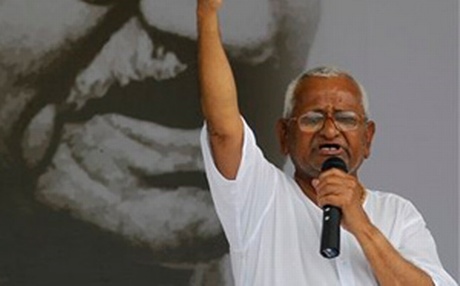 But now (through this HUGE deception) that he has become the "voice" of the common Indian, he has blocked out Arvind Kejriwal from using his photo.

Without the "Anna" cap, the Anna image, Kejriwal is now only left with Gandhi's image, and his own.

Much ado about nothing.

It seems that these demagogues come to the people without any long term plan, without a long term strategy. They "experiment" with the masses.

It is quite possible that as a result of this huge fiasco, the Indian voter and public will be put off entirely by any future "anti-corruption" movements. Once bitten, twice shy. The youth who are associated with IAC must be deeply confused and disappointed. They are young, and they have been misled. Now their "movement" has split, and they don't know whom to "pick". And why.

We are back to the hard grind of systematic preparation and HONEST messaging for policy change.

We need to prepare the nation for change.