One of the most absurd (it is not even imaginable) arguments against FDI is that just like Jahangir gave the British permission to set up a trading unit in India which apparently led (directly!) to the conquest of India, so also allowing Walmart to come to India to compete with existing Indian traders will mean that Walmart will take over India.

1. First Walmart will set up a shop.

2. Then Walmart will set up a town called Walmart Nagar.

3. Then Walmart will set up Walmart East India Company and build a fort around Walmart Nagar.

4. Then Walmart will take over India.

I'm amazed. How easy it is to conquer India! Why in heaven's name do Indian taxpayers pay for an army, navy and air force? I wonder.

This perspective, by the way, comes from a retired armed services officer (Cdr. B.B. Khilari) on Twitter. 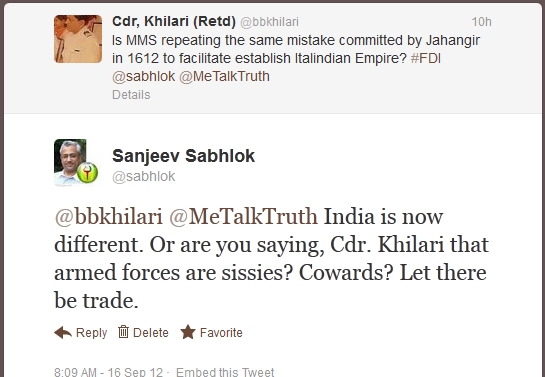 I fully understand that Indians don't understand economics. It is too hard for them. Too counter-intuitive. It hurts their brain to read difficult English books like Adam Smith's Wealth of Nations. For 235 years they couldn't figure out how to read it. From the back, middle or front? Which section provides the kunji to exam questions?

And their own Arthashastra is too hard as well because Kautilya foolishly decided to write it in Sanskrit. He should have (at least) made a Youtube video. Or TV serial. Therefore, only Sanskrit scholars are able to read it. But to them what it says means nothing (I'm talking about “Hindutva” leaders). They use it, therefore, as mantras to chant while offering vibhuti to the fire. Mumble jumble. Blah Blah.

But that senior armed force officials don't even know and understand history? That they can't distinguish the circumstances of 1612 from those of 2012? How can I explain this?

What explains Modi's “WORSHIP” of arms on the one hand, and his TOTAL cowardice in facing COMMERCIAL competition from Walmart, on the other? I've depicted this puzzle below. 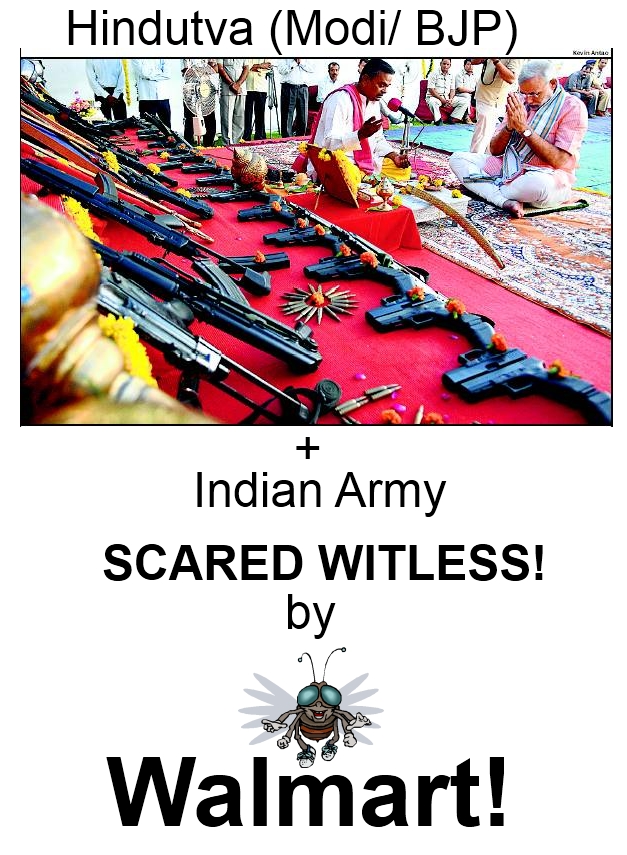 Could anyone explain this to me, please? How is it possible that if an Indian consumer VOLUNTARILY buys something from Walmart, India will become a territory of the Walmart East India Company (which presumably is – secretly – a subsidiary of USA?)?

What's the precise pathway to this dangerous outcome – the loss of Indian sovereignty? Are we expecting Walmart CEO to establish an army? Will he secretly brainwash the checkout counter clerks? Do we know that this is his plan?

I never heard of it before. What have I missed?

Did Julian Assange leak this plan to Modi?

From the Ecuador embassy in London? Where are the plans!! Give me! Let me read them.

What should I do?!